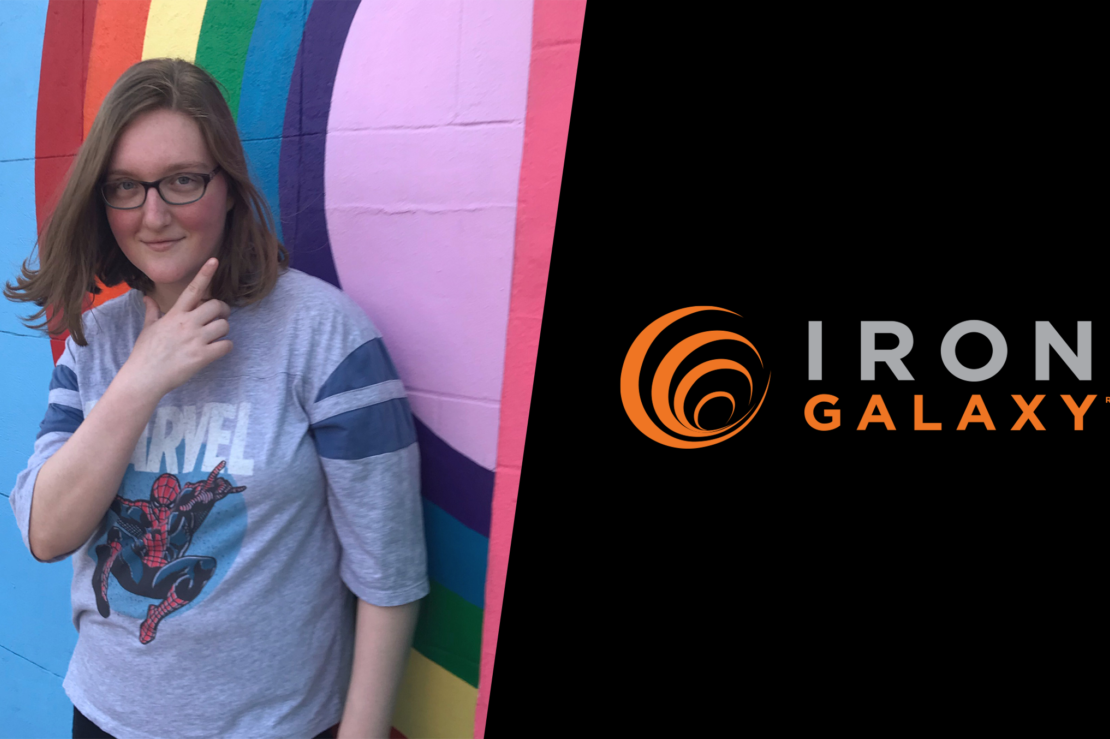 At Iron Galaxy, our designers turn software into amazing experiences for players. This is your chance to learn about our unique individuals and their personal experiences with making our games. Stay tuned for insights on who is making waves in the games industry at IG.

Today, we’re talking to Ellie Locatis, one of our Chicago teammates who works in Design. Ellie started with us in May 2020 and has been working on development for multiple projects across the company. Let’s learn about how Ellie found her way into this exciting industry.

Iron Galaxy: Hi Ellie. Who are you and what would you say you do here at Iron Galaxy?

Ellie Locatis: Hi, I’m Ellie! I’m a Technical Designer. As far as I can tell, that has a unique definition for every technical designer at IG. For me, it means I get to solve problems by prototyping systems and solutions in blueprints.


IG: What is the most challenging aspect of your job?

EL: Finding the right time to stop iterating. The first step to building a prototype is to break down the main goal into a list of smaller goals so it can be tackled in smaller pieces. My main challenge is knowing when to stop adding smaller goals to the list. I’m always coming up with things to add or change about a system as I build it. That’s one of the best things about collaborative work: there’s always someone else looking at my list of smaller goals and helping me identify which ones will get me to my larger goal, and which ones are traps set by Past Ellie to lure me into overdesigning.


IG: Teamwork certainly makes everything we work on better. What is the one skill you learned growing up that you use the most in your role?

EL: Ask questions. I always want to know every possible thing about my system as I go. That usually means knowing about neighboring systems, the tools I’m using to build it, and the goals the team needs the system to ultimately meet. I am constantly looking for input on what I’m doing or what I will be doing next, so I can make informed choices.


IG: What influenced you to pursue a career in game development?

EL: I went to Michigan State for my degree, and there’s a game development club there called Spartasoft. My friend brought me to one of their meetings during my sophomore year, and at the meeting an upperclassman taught us how to make a basic first-person shooter in an hour. I thought it was cool, so I went to their game jam that weekend and built a (truly terrible) game with some of the club members. When the weekend was over, I realized I didn’t ever want to stop, so I kept going to Spartasoft meetings and enrolled in some game dev classes the following semester, then started pursuing a minor in game design, got a part-time job making games, and ultimately decided to make games forever.


IG: Shout out to your alma mater and your friend for exposing you to that game jam! IG’s extremely thankful that we’re even just a part of Ellie’s journey. If you could give someone who wanted to follow in your career footsteps one piece of advice, what would it be?

EL: Make as many things as you can. It doesn’t even have to be a game. Prototype a VR interaction you think would be cool. Draw something and then try to write an art museum plaque for it. Add a new house rule to Monopoly every time you play it. Try to cook that thing your mom made when you were a kid, but don’t ask her for the recipe until afterwards. It’s all learning, and we should all be learning all the time.


IG: I love that, “we should all be learning all the time.” What is the best thing about making games for a living?

EL: I think the best part is being a part of creating something for a player. I know it’s the default answer, but it really is true. Someone is going to have fun playing the game we’re building, and my systems are going to be teeny tiny pieces of that fun. That will always be the coolest thing to me.


IG: You must be very proud of yourself. What is your favorite perk associated with your job?

EL: One of the first steps when working on a feature is competitive analysis, which is business speak for “you get to play other video games that have that feature and take notes.” And as fun as it is to get paid to play video games for a couple days, it’s even better to present a doc full of screenshots and fun facts from those games and have everyone in the room all figure out what wild combination of all this knowledge will best serve our game.


IG: Influence breeds inspiration in all of us. I’m sure the game world isn’t ready for what takeaways you’ve applied towards our newest project. What elements would you say are needed for successful UI design?

EL: If anybody knows the answer to this, I really want to hear it. My UI design experience so far involves building things incrementally, broken into separate widgets whenever something needs to be reused, and then trying desperately to get navigation and focus events to work the way I want them to.


IG: What have you learned during your first year at IG?

EL: I actually keep a list of fun facts that I learn at work. So far, it’s a lot of neat tips for writing documentation, solving specific problems in UE4, C++ snippets stolen from other peoples’ code reviews, and general pieces of advice from coworkers.


IG: That’s a clever way to monitor your progress. What has the IG Employee experience been like compared to your IG Internship?


IG: You were destined for even bigger things, and we’re glad you’re sharing that talent here. With your growing experiencing in the industry, what discipline(s) do you see yourself pursuing?

EL: I think tech design is perfect for me. It’s all the fun of systems design, but the systems are always different.


IG: What is your hometown?

EL: Byron Center, MI. It’s a cornfield twenty minutes south of Grand Rapids. The high school colors are black and orange, so the whole community looks like it's celebrating Halloween every time there’s a football game.


IG: What is your favorite pro-tip for working from home?

EL: Maintain a physical divide between work and home if you can. I have my own PC, so when I started working from home I bought a second desk and put my work PC in a different room. That way if I wanted to play games at the end of the day, I had to physically “leave” work to do it.


IG: What is something you have always wanted to create?

EL: I’ve always wanted to write a novel. I’ve started a bunch of times. I’m very good at building magic systems and deciding exactly which existing teen dystopian romance novel to steal from, but I’m terrible at dialogue so I always reach a point where I realize it’s all terrible and I delete everything so no one has to read “dude” in four consecutive sentences.


IG: That sounds like the beginning workings of a new unique teen dystopian romance novel to me. If you could only eat one food for the rest of your life, what would you choose?

EL: Burrito bowls. Just throw some rice, meat, and veggies together and I’m impressed every time.


IG: Burrito bowl in hand, what is one place that you hope to see one day?

EL: I’ve always wanted to see the Grand Canyon. I’m from the Midwest, so I’m used to trees and mid-sized hills and generally blah geography. I’ve always been fascinated by the idea of a giant orange hole in the world.


IG: What is your favorite book or series?

EL: I’ve just started my first read of the seventh book in Steven Erikson’s series Malazan Book of the Fallen. It’s all incredible. The second book has been the best so far, though.


IG: What was the last concert you saw?

EL: Panic! At The Disco, with Vinyl Theatre opening. Unless you count virtual concerts during COVID, then it was The Airborne Toxic Event.


IG: Let’s pretend that it’s “Nine in the Afternoon” and you’re driving on Lake Shore Drive. What is the one song most likely to earn you a speeding ticket?


IG: What game have you spent the most time playing?

EL: Overwatch, first on PS4 and now on PC. I am only occasionally good at aiming, so I’m a very proud Mercy main.


IG: What movie have you seen the most times?

EL: The Fifth Element. It’s my favorite of all time. It has everything you could ever want in a movie: Bruce Willis, flying cars, orange hair, an opera concert, a bad guy that you can’t help but root against, true love, and Mondoshawan (aka the most jukebox-shaped aliens I’ve ever seen).

IG: The human race evolves, jukebox-shaped aliens freely roam the planet, what is the one superpower you’d choose to keep up with the times?

EL: Teleportation. I absolutely hate running late, I’d be a much calmer person if I could just boop to wherever I’m going instantaneously.


IG: If you were to boop anywhere in time, which historical period would you like to experience first-hand?

EL: I would like to see the Old West. You know, with cowboy hats and horses and saloon doors and all that. It’d be so cool. I could be like a sheriff or something. Did they allow female sheriffs? I’ll bet if I found a corrupt sheriff and dueled him for his badge, that would count.


IG: Final question. Sheriff Locatis, what fictional universe would you choose over our own? What if there was no coming back?

EL: Star Trek. I could explore space and not interfere but also assist in revolutions on alien planets and meet mirror-universe me.

Multiple Ellie’s, writing multiple novels, in the Old West! Thanks for letting us interview you. We’re excited to see what the future has in store and watching your career soar.

See yourself fitting in with our Design team? We're currently hiring - check out our job listings and see if there's a fit for you. Other open positions are also available.