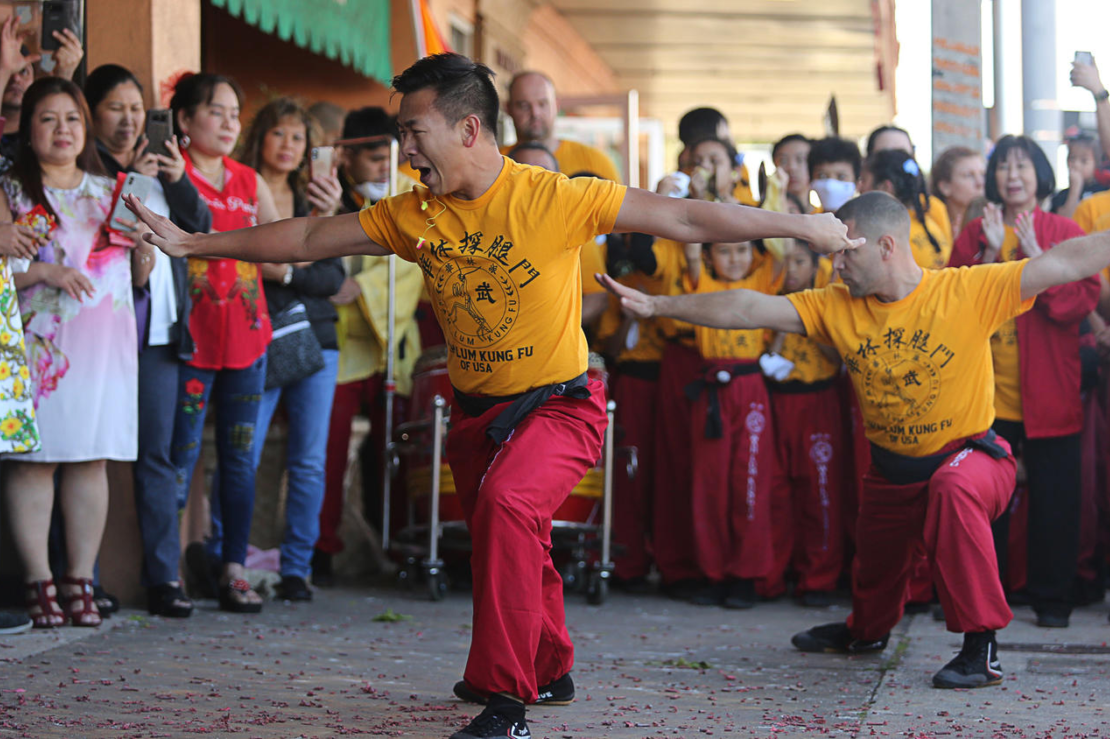 Our people come from different backgrounds. They bring different perspectives to our team and the work we do together. We think this is a great part of what makes us successful. Not only is everyone welcome at Iron Galaxy, but we're passionate about celebrating the things that make each of us unique. For #AAPIHeritageMonth, our Asian American and Pacific Islander Affinity group has taken a moment to share some insights from their lives so we can learn more about them.

Different members from the AAPI group have given us a look into their world. These highlights from their upbringing include their favorite festivals and holidays, fashion and music, and martial arts.

I remember going around to shops and restaurants with my Kung Fu school to perform a lion dance, which is usually accompanied by lots of firecrackers being lit, to help bring luck and chase away the evil spirits.

Celebrating at home my family (extended members too) would feast on banh chung, gamble, and listen to the music my Dad's band would play.

FUN FACT: You shouldn't sweep your house on Tet, as you don't want to sweep away all your good luck!

My fondest memories as a kid was gathering at church for an evening of games with the other kids. Then when the moon was highest in the sky we'd turn off all the lights, prep our lanterns, and then march outside while we sang a happy song. Afterwards, we'd all have a bit of Banh Trung Thu (mooncakes) to round out the evening.

Vietnam isn't as well known for martial arts, but it has a few different styles. One of the more well known styles is called Vovinam (short for Võ Việt Nam - Vietnamese Martial Arts). Founded in 1938 by Nguyễn Lộc, the style combined elements of Chinese and Japanese martial arts with existing Vietnamese styles and was partially meant to help promote a sense of national identity and pride during the French occupation. Here are examples of a form and a signature technique:

Doljanchi, or Dol, is the first birthday celebration in Korea. In modern times, these are kind of treated like a wedding. Event hall, catering, party favors, etc. The purpose is to celebrate longevity. The infant mortality was astounding even through the 50's. Surviving the first year was an incredible milestone.

Dol involves a ceremony that foretells the baby's future. Items are placed in front of the baby and whichever they choose first is in indication for their future. Calligraphy brush/book = wise, money = wealth, food = success/never hungry, red/blue thread = happily married. Modern ceremonies add in things like gavels, stethoscopes, and baseball/tennis ball, and microphones for career focused items. Rice cakes and seaweed soup, and fresh fruit are musts. Babies, and sometimes parents don hanboks for the ceremony. Traditional gifts include gold rings and bracelets, money, clothing. The gold jewelry is held by the parents until the child’s 18th birthday. Previously the gold would be sold so that the new adult could start their adult lives.

One of my memories as a kid is that around Qingming Festival (also known as Tomb-Sweeping Day) in April, my family would gather together along with some distant relatives and make a big trip to my great-grandparents' tomb, which is on a mountain that usually took us a long hike to get to, and we would cut the weed and clean the tomb. Sometimes we would also burn some fake money in front of the tombstone, which is considered a way to deliver the money to my great-grandparents in another world. I always complained a lot though since it was a lot of physical work, but I always volunteered to burn the money because it didn't take too much work and was kind of fun to 10-year-old Chaohao. Then we would usually have a family lunch afterward. My parents and my grandparents would chat for a very long time, while I would just play with my cousins.

Qingtuan is a traditional food that we eat around Qingming Festival, but in the area where I'm from, we don't use anything to dye it, so it's just white instead of green, and we usually fill it with ground pork and pickled cabbage instead. I haven't had it for years though, and would love to try it again.

I'd love to highlight culture that my 婆婆 or Pópo (Maternal Grandmother) exposed me to through VHS tapes and visits to Chinatown in Chicago as a kid. Please see video of a high pole Lion Dance performance. From the colors of the outfit, animal-like movement and micro gestures, to the incredible tag-teamed timing; I've always been amazed by this impressive performance art. Hopefully the video sends you down a spiral of YouTube curiosity.

Another fond moment of my childhood was visiting my Pópo's music club in Chinatown. She'd frequently sing Chinese Opera around the house and sing karaoke in the living room. One of the most magical sights to see was when she would do her full make-up. Seeing a Chinese Opera production with her someday soon is a bucket list item of mine.

Christmas in the Philippines

Made with paper and bamboo sticks, Parol lanterns are a large part of Christmas in the Philippines which is usually celebrated from September 1st until early February! Our family teared up watching this Disney take on the tradition.

Many of the rituals for Christmas in the Philippines are religious based but my favorite was always Nochebuena, a big meal shared on midnight of Christmas Eve. Because Nochebuena is celebrated in Latinx cultures as well, it felt like a perfect blend for our multi-cultural family.

Tinikling is a traditional folk dance that involves tapping and sliding bamboo poles on the ground while dancers jump in and out, careful to not get their ankles caught. I absolutely wore double layered socks learning this as a kid but performing for friends and family always made us proud.

The traditional barong tagalog shirts and balintawak dresses worn for this dance have been modernized for everyday wear at places like Vinta Gallery.

Back in the day, members of the Lao community formed a Lao schooling program. Senior community members would volunteer their time to help preserve our culture by teaching the youth how to read/write Lao, traditional dances, instruments, and evening cooking. They held class once a week on Sundays. We donate food and money to the temple and whatever snacks the monks don't take, is up for grabs. With hundreds of people attending and only a handful of monks, there was always a ton of snacks for the kids to claim. I remember that being my favorite part of going to the temple. People from all around the area would make delicious food to share with the community.

Our different backgrounds largely shape what makes our games and studio unique. We're thankful to our AAPI community for sharing their voices with us. Having a diverse development team that includes people from different places and cultures can only make us better at making games for everyone.